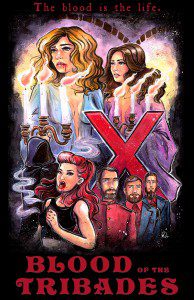 Blood of the Tribades is our third feature film (after TEN and Magnetic), and it helps us to continue our mission to make strange and entertaining low budget, independent genre films with sociopolitical messages. We are deeply inspired by both the sparse, surrealist, weirdo 70s arthouse euro vampire films [e.g., The Shiver of the Vampires (1971), Lips of Blood (1975), andVampyros Lesbos (1971)] and the theatre-derived British Hammer vampire films [e.g., Twins of Evil (1971),Countess Dracula (1971), Lust For a Vampire (1971), and The Vampire Lovers(1970)].

For this film, we have created a vampire world/lore in which a vampire named Bathor turned an entire village to vampires, stuck around long enough to teach them to survive, and then promised to return in 2000 years after conquering the rest of the continent. The only problem with this plan is that the vampires, although immortal, have only a limited capacity for memory. As time passes, they forget their utopian society and led by the totalitarian zealot Grando, become paranoid, superstitious fundamentalists, splitting their society by race and gender lines, seeking to destroy those who are deemed sinful.

Long-forgotten lovers Élisabeth and Fantine find that, with the help of those who were banished in the past, it is their fate to piece together the past and help preserve the little that remains before Bathor’s impending return.

The blood is the life!

Sophia Cacciola (she/her/her) and Michael J. Epstein (he/him/his) are Somerville, MA-based filmmakers, writers, and musicians. Their films and music have been have been featured in such outlets as TIME, USAToday, SPIN, CURVE, andFangoria.